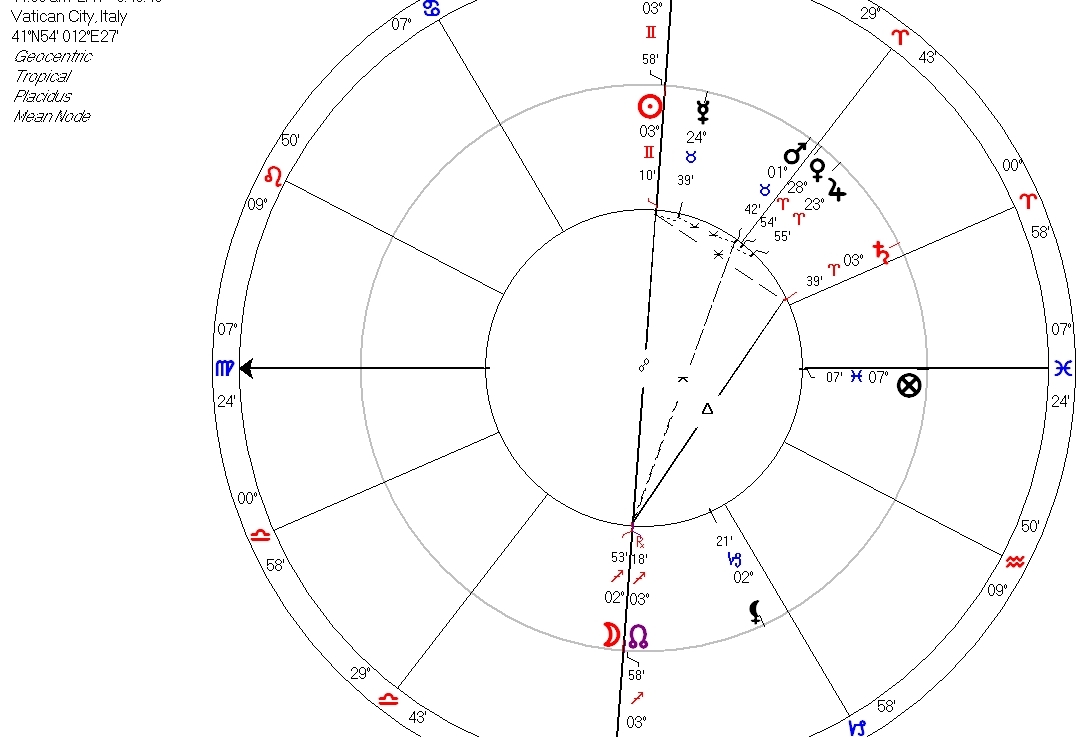 In the last two installments of “(some) Vatican Astrology,” I posted the charts for two major Papal dicta on the Society of Jesus, also called the Jesuits.

I stated that there might have been some kind of “elective” astrology involved, as the two charts have certain astrological elements that would point to such astro-planning, centered on the two great chronocrators – Jupiter and Saturn.

A third chart for the Jesuits is the date of the Ascendente Domino, on May 24, 1584.  This is the final Papal Bull concerning the Jesuits before the Society was suppressed in 1773.

The Bull reaffirms the original mission of the Society, and offers some clarification on minor issues:

Ascendente Domino, a Bull issued by Gregory XIII, May 24, 1584, in favor of the Society of Jesus, to confirm the Constitution of the Society and the privileges already granted to it by Paul III, Julius III, Paul IV, and Pius V. It recalls and confirms the means which St. Ignatius had prescribed in order that the Society might attain the end for which he had founded it.

So, 43 years and 8 months after Regimini Militantis Ecclesiae, we have another Bull.  The astrology chart for this edict is nothing short of astounding:

As can be seen, this is a chart for a full moon at 3º Gemini/Sagittarius, and with Moon being very close to the North Lunar Node, is an eclipse!  This particular eclipse is a doozie – one of the longest in duration of all lunar eclipses:

This total eclipse is central meaning the Moon’s disk actually passes through the axis of Earth’s umbral shadow. It has an umbral eclipse magnitude of 1.8146, and Gamma has a value of -0.0065. Because they are so deep, such eclipses typically have the longest total phases. In this case, the duration of totality lasts 106.1 minutes. That qualifies the eclipse as a member of a select class of exceptionally long total eclipses with durations exceeding 100 minutes.  (emphasis added)

Although this lunar eclipse would not have been visible in Europe, the fact that the lunation neatly aligned with the meridian over Roman Christendom should not be ignored:

Not only is this a remarkable eclipse in terms of duration, it is also along a most important fixed star axis – that of Aldebaran and Antares – the alpha stars of both Taurus and Scorpio.

There is no other pairing of fixed stars quite like Aldebaran and Antares.  Both are alpha stars of their respective constellations, and both are close enough to the ecliptic that they can be occulted by the Moon.  They are, along with Regulus and Fomalhaut (alpha Cetus) the Royal Stars of Persia, which aren’t necessarily Persian, or even royal, but the moniker has been adopted in astrological lore because of the great antiquity of their origin as markers of the heavenly quadrature.

Most importantly, they are almost precisely opposite each other in terms of ecliptic longitude, as can be seen above, where their values are both 3º58′ of Gemini and Sagittarius, which translates into the “sidereal” astrological values of ~15º Taurus and ~15º Scorpio.

For newcomers to the historical study of astrology, the noted researcher and author Cyril Fagan re-introduced the notion of a fixed zodiac in his 1951 treatise on the matter entitled “Zodiacs Old and New.”  He demonstrated that there was once an ancient zodiac that was based on the fixed stars, rather than the Sun’s precise solstices and equinoxes.  This ancient zodiac used the Royal Stars as fiducials, and Aldebaran and Antares marked 15º Taurus and 15º Scorpio, respectively:

The values of 15º Taurus/Scorpio are at 45º angles from 0º Aries/Libra and 0º Cancer/Capricorn, which define the cardinal cross of the sidereal heavens.

Nabu “the proclaimer,” who is accorded the highest honors on the monuments at Adad-Nirari, was “par excellence” the god of astrology and prophecy, as well as being the genius of wisdom, mathematics, reading, writing, teaching, and schools. In Babylonian astro-theology he was identified with the fixed star Aldebaran in the constellation of Taurus, and with the planet Mercury. Nabu had charge of the Tablets of Fate on which he inscribed the names and destinies of mortals. His monuments portray him holding the stylus which was his special symbol. On the statues of this god Adad-Nirari caused the following exhortation to be inscribed in cuneiform characters:

“Thou who shalt follow after, trust in NABU; trust not in any other god.”

Earlier in Zodiacs Old and New, Fagan wonders aloud why the fixed star Spica was not chosen as the fiducial for the zodiac of fixed stars, which he calls “the hypsomatic zodiac,” but instead was placed about one degree off, at 29º Virgo. He acknowledges that, of course, Spica is in Virgo, and not Libra, so having it as the marker for Libra would be a bit odd. He then espouses that Aldebaran and Antares are the true anchors of this fixed zodiac:

Considering Spica as being in Virgo 29.00º of the sidereal zodiac puts Aldebaran (Al-debaranu — “Forecaster” and ‘Writer,” Babylonian isu.li-e = “Tablet,” according to Langdon) almost in the mathematical centre of Taurus, and Antares, in the centre of Scorpio…

Fagan then lists the longitudes for Aldebaran and Antares, showing proper motion, if Spica is fixed at 29º:

If the astrological chart for Ascendente Domino is to be taken as an astrological election, we then must ask, why?  What do they hope to tell us about themselves through such astrology?

One possible facet could be that Ascendente Domino comes in the aftermath of the Gregorian calendar reform conferences from 1572 through 1582, of which the Jesuit Christopher Clavius was placed in charge by Pope Gregory XIII.  The reform did not happen overnight.  It was the culmination of various ideas and calculations from experts all around Europe, with Clavius as the point man who had to explain all of the plans, and then convince everyone to accept the final plan, which was implemented in February of 1582.

The reason for the reform measure was the astronomical sanctity of Easter, which has both astronomical and calendrical components in its computus.  Easter is based on the idea that the first full moon after the spring equinox sheds the most light on the Earth, but by the 16th Century, the calendar had slipped behind its astronomical mooring of March 20 or March 21 being the actual date of the spring equinox.

In other words, Clavius needed to be an expert on lunations in order to understand how Easter is timed, and thus he was surely an expert in charting out the motions of heavenly bodies with serious precision.

The Gregorian reform did shorten the year of 1582 by ten days – they were taken out of October – but there was no need for this number to be ten.  It could have been eleven, for instance, but the ten-day mandate did mean that a solar (annular) eclipse would fall on Christmas Day of 1582.  This eclipse was not visible in Europe either, but, at the moment of greatest eclipse, at the location of the Vatican, the star Aldebaran was setting, and Antares was rising: 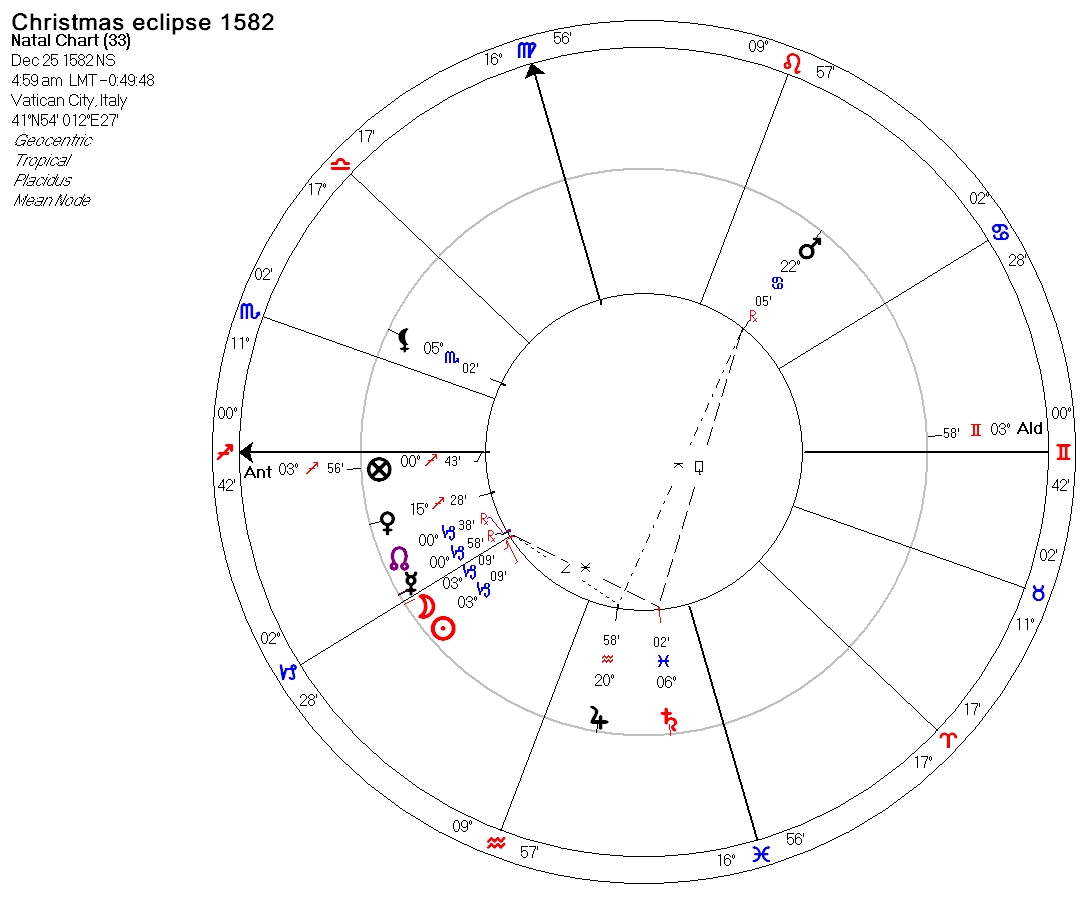 Another possible connection is the calendar adjustment itself, which took place at midnight of October 4, 1582, which became not October 5, but October 15, 1582.  The Moon is conjunct Aldebaran that night:

Another obvious facet is that Nabu, in the celestial form of Aldebaran, is associated with the very same activities that the Jesuits undertake: astrology, prophecy, as well as being the genius of wisdom, mathematics, reading, writing, teaching, and schools….  The Jesuits, as well as the Papacy, did, and still do, believe in the temporal power of the Holy See, and that the pre-Christian world’s wisdom and achievements were there to be subsumed into Roman Christianity.  The ends justify the means because this is a fight for the soul of mankind, etc.  And, of course, the exhortation to “Trust no god before Nabu” sounds an awful lot like the First Commandment.

We will get into more with Aldebaran in the coming days, because there is a lot more.

The point of all this thus far is: for the third time in a row, the Papacy and the Jesuits have teamed up on an astrologically significant chart-moment with which to promote the Society of Jesus.  To recap:

We are still a good distance away from the punch line of this series of blog posts, so stick with me, as, like Nabu, one should trust in me, and not any other blogger.

Emersion: A Blog from Occursion Media on Somewhat Interesting Hidden and Cryptic Astrological Histories
by Jeeni

The New Home of The Hirsch Files' Laramie Hirsch

A Tapestry Blog of Astrology, Politics, Art, and Social Concerns