Of all the symbols in the Sibly engraving, none are more obscure than the grouping of five elements amidst the Native man.

If we see these as Masonic symbols, the picture becomes more clear.  Firstly, it has been my contention that this scene depicts a foundational event for the Federal Government, and the cube at the rightmost is a cornerstone, waiting to be laid.  Cubes and squares are ubiquitous in Masonic symbolry, representing geometry, and ceremonially a link to the cornerstone at the Temple of Solomon, which measured as a square sacred cubit the Masons think is 18″ by 18″.  There is a stone of these proportions on display in the Scottish Rite headquarters in Washington DC of that size, though not all cornerstones are that size.

In any event, if we assume that the scene is looking westward, the cornerstone falls in the correct place, that of the northwest  corner, pointing to where the Sun rises in the summertime.  Masonry is by and large a solar cult, as is Christianity and Judaism, and many other religious movements in history.  The Sun is, after all, darn important.

All of the figures in the engraving are pointing to that central place where the first stone is to be laid, but it is yet unlaid.  At the left of the Native man’s constellation of symbols is the anchor, and this anchor too is at an angle of 39°, paralleling Justita’s sword, and also pointing north, showing us the future latitude of the Federal City (now called Washington DC). 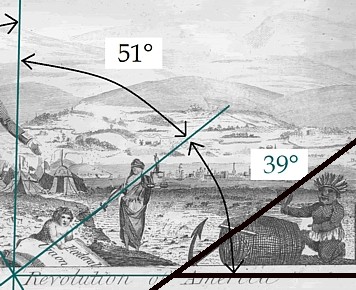 Not only does the 39° repeat itself, but it is found a third time via the anchor’s perpendicular cross which is at the oblique angle of 51°: 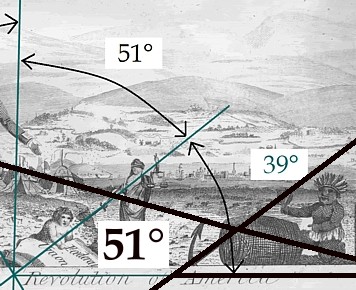 This reinforcement of the geometrical scheme leaves no doubt as to the meaning of this engraving’s lower half.  Anchors in Masonic symbolism are tied to the notion of safe harbor and the calm after the storm, and though it can be a stand-alone symbol, it is often featured with either a sea-nymph (more flood symbolism) or an Ark, as in the one Noah used in his mythical journey through the flood.

“The Ark and the Anchor are emblems of a well grounded hope and a well spent life.  They are emblematical of the divine Ark which triumphantly bears us over the tempestuous sea of troubles; and that Anchor which shall safely moor us in a peaceful harbour, where the wicked cease from troubling and the weary are at rest.” – George Oliver, “Signs and Symbols”, page 69.

Masonic dogma includes an antediluvian narrative that speaks to the biblical account, but also the lost utopia of Atlantis, and the “new world” was thought to be the discovery of Atlantis by some Masonic elements.  Flood mythology is common in ancient cultures, and the Christian story is now known to be a re-telling of the Epic of Gilgamesh from the Mesopotamians, but in the time of Sibly, such matters were unknown.  In this engraving, the anchor is now being used to symbolize the ship of state finding a place to berth, after the torment of the wars fought to conquer the new world for Freemasonry.

Next to the anchor is a barrel, or a cask, the contents of which are unknown, but if we assume a Masonic rite, it might contain wine or oil, the two liquids used in such ceremonies.  More on this element later.

The man is holding two things, one being tobacco leaves, perhaps, and the other unidentifiable.  If we assume a cornerstone ceremony, then the tobacco could be used in lieu of the corn or wheat.  The man is prostrate, paying homage to the event, and to the new rulers of the land.

Next, a look at the remaining geometry of the lower half, which features yet more surprises.

2 thoughts on “The Cornerstone Always Goes in the Northeast”