In the first four parts of “(some) Vatican Astrology,” I laid out the astrological charts for four major milestones in the Vatican’s promotion of the Society of Jesus, better known as the Jesuits.  They are:

These four charts are, at this time in this series, the basic foundational charts of the Jesuits.

We do know that the Jesuits — as a Vatican-approved company — has two distinct epochs, as the group ordained in 1540 by the Vatican was suppressed formally in 1773; 41 years later, the Vatican un-suppressed them as a reformed society, in 1814.

The first period lasted 233 years; the second period has lasted 203 years.  In all of this time, though, no Jesuit had ever been elected to the Holy See’s highest office – the Papacy itself.  That is, until 2013, when Argentinian Cardinal Jorge Mario Bergoglio, S.J., was elected as Pope on March 13, 2013, at about 7:05 pm, local time.  He chose the name of Francis, a first for that particular name.

The chart for Pope Francis’ Vatican election is: 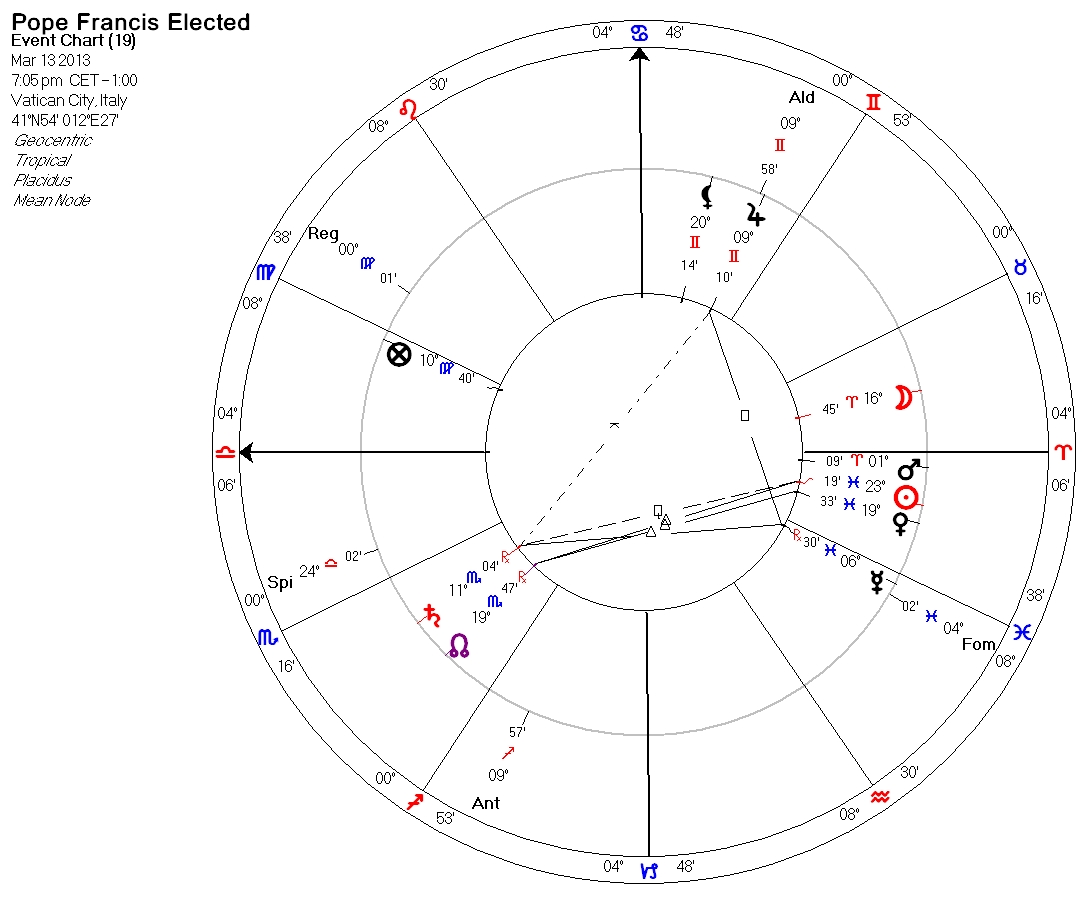 The sidereal chart for this event is: 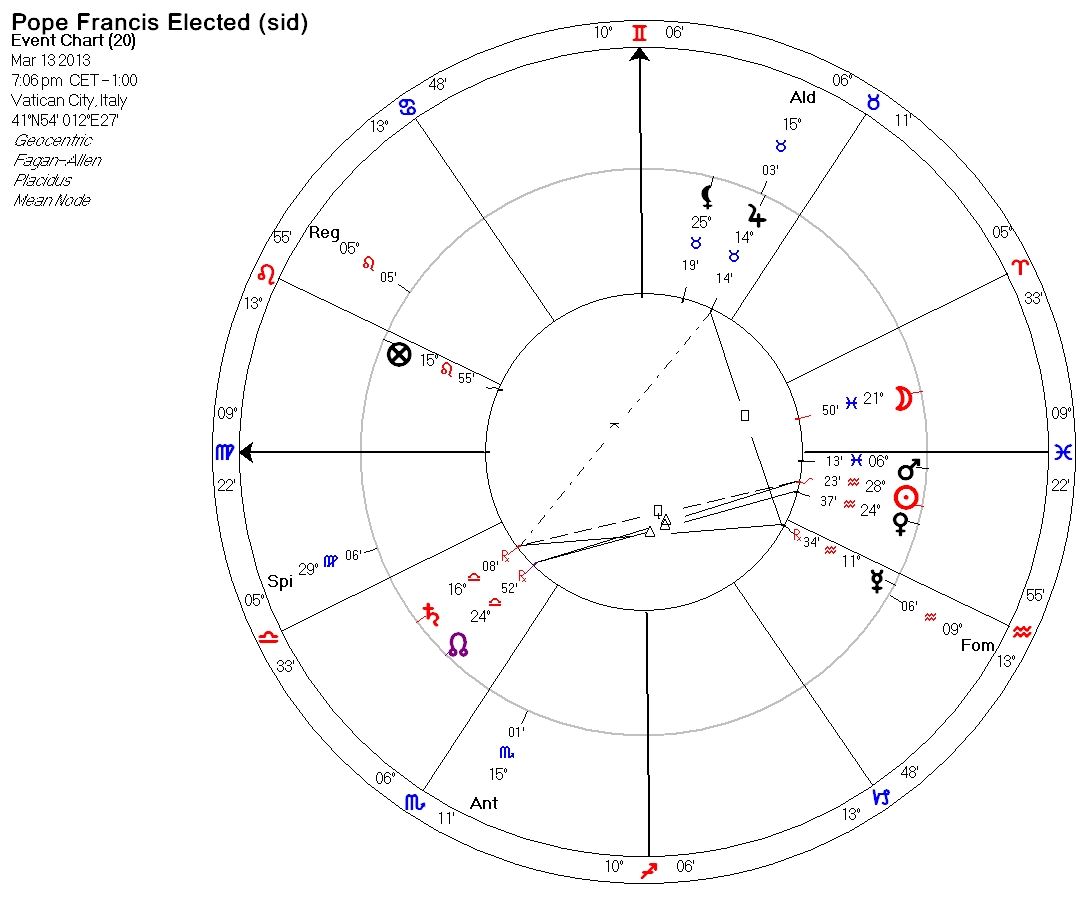 As we can see in either of these charts, Jupiter is conjunct Aldebaran.  When juxtaposed to the earlier Jesuit charts, remarkable alignments occur.  The first bi-wheel is of Ascendente Domino and the Bergoglio election moment: 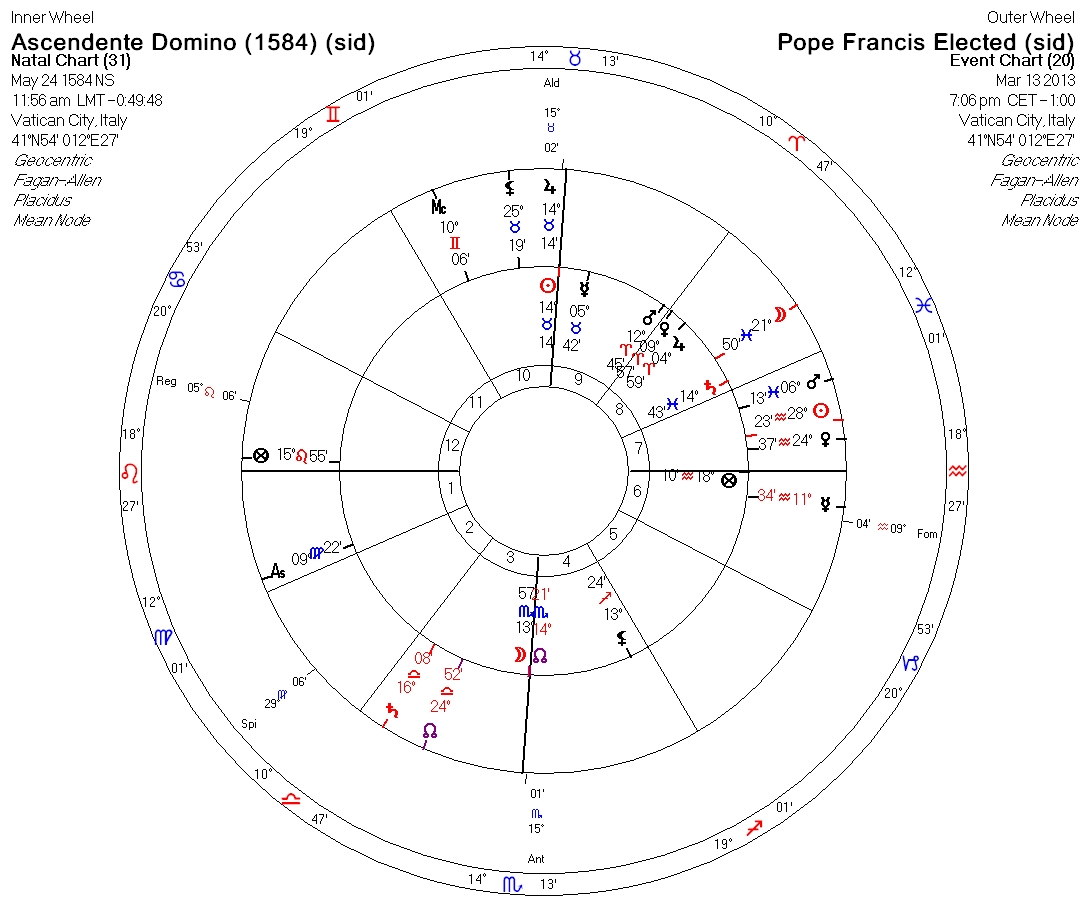 As we can see, the Bergoglio election Jupiter of 14º14′ Taurus is exactly conjunct the Ascendente Domino Sun of 14º14′ Taurus.  And, it is aligned with the Chiesa del Gesu consecration as well:

Another alignment is Pope Francis Venus opposite Chiesa del Gesu consecration Moon; thus, the two benefics, Jupiter and Saturn, in the Francis chart, are opposite the two luminaries in the consecration chart.  Could it be that these alignments are all just circumstantial?  “That’s how astrology works, Ed,” an associate told me, implying that, of course we’ll see such alignments when comparing relevant astrological moments.  We’re all just riding the waves of the cosmic gears of the celestial mechanics, fated.

Yet, the elevation of Bergoglio to Francis was a very contrived affair.  Normally, popes are popes until they pass away, but Francis’ predecessor, Pope Benedict XVI, apparently chose to resign his papacy, somewhat suddenly, and to the surprise of basically everyone.  His last day as the Bishop of Rome would be on February 28, 2013.  He cited his declining health as the main reason for his departure.  (He is still alive, btw, and is 91 years of age.)

That gave enough time for a congress, or conclave, of Cardinals to assemble at the Vatican, and vote in a new pope.  That began on March 12, 2013, and ended with the vote for Bergoglio on March 13.  So, thus far, we have these Jesuit charts at this point in my “(some) Vatican Astrology” series, and an update of our chart elements is appropriate:

At this point, I need to add one more chart, that of the Papal Bull entitled Inter gravissimas that announced and codified the Gregorian Reform. 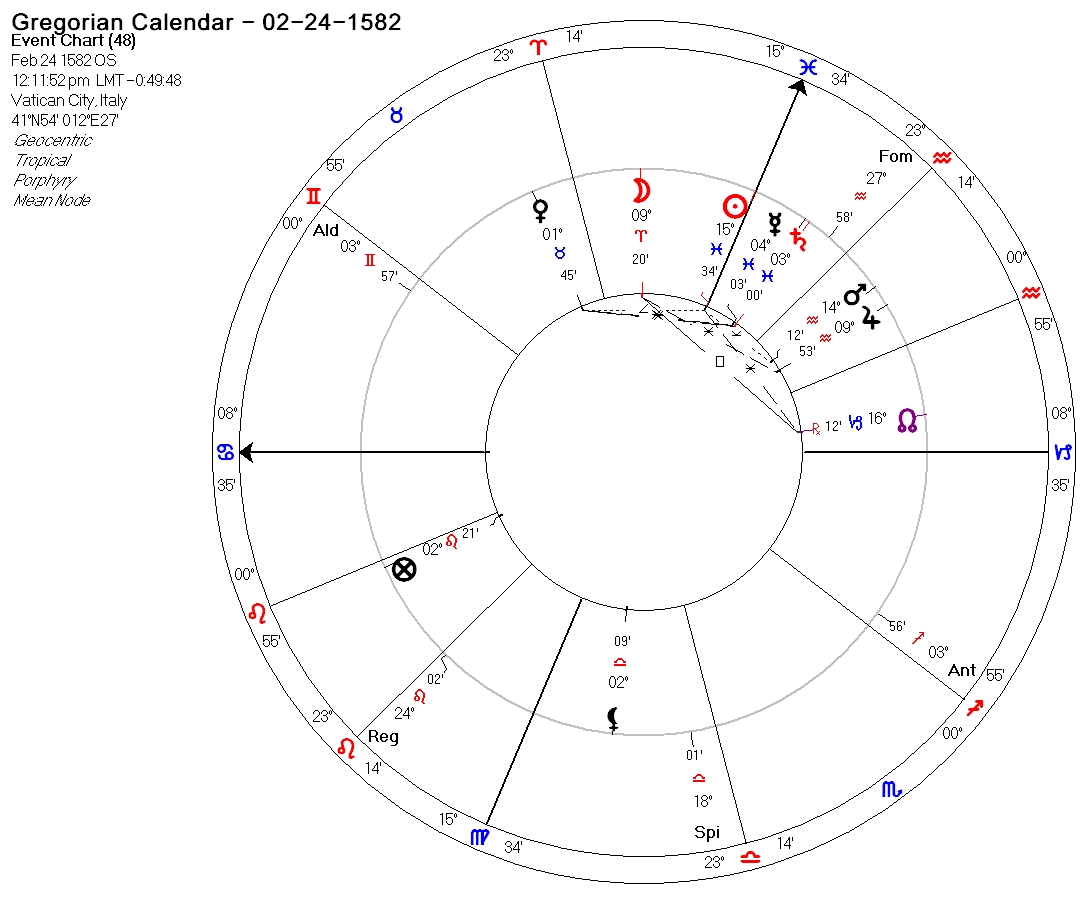 This chart is interesting, as it, again, aligns, this time by squares, or 90º angles, a conjunction of Mercury and Saturn with the Aldebaran/Antares axis.  In addition to having rulership of agriculture, Saturn also ruled time itself.  It was called “Cronos” in the Greek tradition, from which we get our modern words like “chronology” or “synchronous.”  As a ruler of time, one has to be ruler of the notions of time that we now call calendars; to operate a calendar, one needs to understand the celestial motions of the Sun and Moon, as months (Moon) and years (Sun) are what define calendars.

Having Mercury in the mix, conjunct Saturn and aligned with Aldebaran and Antares, the notion of Hermetic concerns come up, such as the transmission of knowledge, wisdom, and the basic process of sky-mathematics itself.

In any event, we can see that the sidereal values for the Sun in both Inter gravissimas and the opening of the 2013 conclave that elected Bergoglio, which I time to about 9 am on March 12, are quite similar:

So, not only does Jupiter conjoin Aldebaran for the conclave of 2013, and the imminent election of Bergoglio, it also squares quite nicely the Mercury/Saturn of Inter gravissimas.(The new moon of March 11 — 26º27 Aquarius — is also conjunct the Sun of the conclave.) The calendar reform was, as pointed out in Part III, was the domain of the Jesuits, and Christopher Clavius, who was a top astronomer, and a finalizer of the reform schema.

(The choice to publish Inter gravissimas on February 24 is of note to calendar historians, as this was the date in the old Julian calendar that was “doubled” in leap years.  In other words, the old calendar dating count did not use a numbering system of 1 through 28, 30, or 31 in month day-counts.  Instead, the Romans used a system of Kalends, Nones, and Ides.  Kalends (which is where our word for “calendar” originates) were a backwards count for the six-day period before the beginning of the next month, and so Inter gravissimas was issued on “sextile kalends Marti,” with the “sextile” meaning 6th, and March being named after Marti, or Mars.  When the leap day was added, it was the day after sextile kalends, and called “bissextile kalends,” technically causing a second “February 24” to take place, giving that year’s February 29 days.  In the modern day, we just plop a February 29 in the calendar and move on.)

In the pope’s role as the “pontifex maximus,” he is also the authority of timekeeping, and something the Church considers to be their “temporal power” when it comes to world leadership.

Wrapping up this installment of “(some) Vatican Astrology,” we now see that much of the important 16th Century astrology surrounding the Jesuits is connected to the very contemporary reality of Pope Francis, who is about to celebrate his 6th anniversary as pope.

But, as Todd said, “There’s always more!”  There’s a lot more, and we are barely at the end of the beginning of this study.  And, you might be asking, “Ed, what starry thingie do we have at the sidereal 27th degree of Aquarius?”  We’ll find out!

(Yes, there’s a good reason for Todd being here, dressed up like an astronaut during the 2009 AWATS tour.)